Here are some pictures of my recent forge rebuild. When I originally started to look into refractory concrete as an option, I noticed that there were not a lot of articles on the web describing the process of casting a forge shell from refractory concrete. While many of the steps are pretty straightforward and do not significantly differ from using regular concrete, some people might still find my experience with using Kast-O-Lite 30 LI useful. My need for a new forge arose after some extended forge welding and bloom consolidation caused the roof of my previous forge to cave in. After thinking of different ways to construct a new forge, I decided to go with refractory concrete as it can take more abuse than the kaowool based solution I had employed previously. Kast-O-Lite 30 LI seemed like it fit the bill with a maximum use temperature of 3000F which is not something I am likely to reach unless I am over boiling iron. For general forging, Kast-O-Lite 26 would have been better suited as it provides better heat insulation but I had the 30 LI concrete available. Here is an outline of the process:

The construction used five pieces of concrete: Two sides, one roof, and two pegs. Where the pieces met, I had to split the angle, so used 22.5 degrees on each side of the different pieces. The end result was going to be a shell that would support itself. The first step was creating the forms from 2x4 and some wooden boards. The forge itself is about 13in long, and about 9in high. To get the angles, I used a bandsaw with a swiveling table that I could dial to 22.5 degrees. The measurements that determines the spacing of the pieces were all done on the outside and piece of 2x4 was attached to the board with wood screws. Here is how they looked like.

The Serpent in the Sword continued...

The Serpent in the Sword 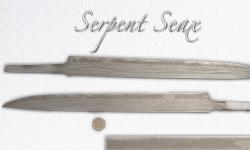