As everyone was upgrading their DNS infrastructure to be ready for August 7th, some security reseachers independently discovered the DNS flaw and disclosed it. For those of us, who were either informed or had figured out the problem ourselves, it is surprising to find irresponsible and grossly negligent disclosure from respected members of our community. There was a reason that Kaminsky did not disclose the flaw publicly when he found it. The DNS infrastructure needed to be upgraded and repaired.

Well, the time has run out. A current study by David Dagon and myself puts the number of open recursive resolvers using static source ports at about 78%. That is a lot of servers that need to be patched. Two more weeks till August 7th could have helped to fix many of them. Unfortunately, we will not find out now. 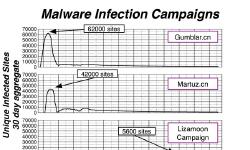 Anatomy of a PDF Exploit